Wink used to be among our recommended smart home platforms years ago, but after being sold to will.i.am’s i.am+ company, news around the scrambling business that couldn’t pay some of its employees last year died down. Now Wink has announced that it’s taking drastic action to keep the lights on. It’s switching to a subscription at $4.99 a month starting next week on May 13, and your devices will stop working if you don’t pay.

In a blog post, Wink explains that “long term costs and recent economic events have caused additional strain on our business” and that the new “fee is designed to be as modest as possible.” The company warns that “should you choose not to sign up for a subscription you will no longer be able to access your Wink devices from the app, with voice control or through the API, and your automations will be disabled.” At least it’s possible to reactivate everything if you do decide to pay later on.

While it’s understandable that any company needs to be profitable if it wants to keep the lights on, this switch to a subscription is poorly executed. Customers have only been notified a week prior to the change, and if they’re not ready to pay, they’ll lose access to their complete smart home, including devices from other companies connected to a Wink hub. If they don’t want to purchase a hub from another manufacturer, reconnect all of their devices, and set up their routines once more, they’ll have to pay the monthly fee, essentially holding their smart home hostage. Compare that with Enpass which recently switched to a subscription service, too. The password manager didn’t charge existing customers who previously paid one-time fees, only new users were affected.

This situation just goes to show that maybe local solutions that don’t rely on external servers might be the way to go for smart homes. It looks like competitor Google is starting to recognize that, as the company is working on creating local, internet-free control options in cooperation with other manufacturers like Hue, TP-Link, and more. 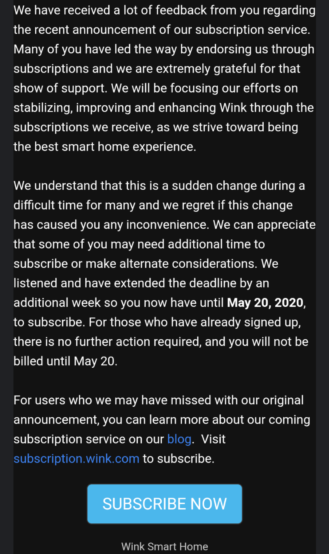 Wink has sent out an update to customers, telling them that it has extended the subscription deadline by a week, the new cut-off date being May 20. The company says it understands that it’s a “sudden change during a difficult time,” but it still hasn’t addressed any of the core issues. Customers who are not ready to pay the monthly fee will not be able to use their Wink hub any longer after that date.