In October of last year, I broke the news that Dead Cells had popped up on the Play Store as a pre-registration listing, but the title was soon delisted. Sadly there was no way to know if that listing was a mistake, or if someone had simply pulled the trigger a little early. Well, there is no more need to guess. Motion Twin has announced a partnership with Playdigious to bring Dead Cells to mobile. The title is scheduled to be released on iOS sometime this summer, and an Android version “will come later.”

Today’s announcement doesn’t really go into many details other than the fact that Playdigious will serve as the publisher for this mobile port, and that an iOS and Android release are both planned for the future, with the iOS version coming sometime this summer. We also know the iOS version will come with controller support and a single price point ($9.99) with no free-to-play mechanics in tow, so hopefully the Android version will land with similar features. At the very least Playdigious has provided an email alert system on its Dead Cells website for those that would like to register so that they will receive a notification once the game is available on their platform of choice.

I suppose it was obvious that Dead Cells would eventually make its way to mobile, especially after an accidental Play Store listing that came complete with a pre-registration button. Heck, it would even appear that the once-removed Play Store listing has made a return, though all information has been blanked out. Whether or not this page will serve as the official listing upon release remains to be seen, but it may be something to keep an eye on in the coming months as development of the Dead Cells mobile port progresses.

Prepare to hone your thumbs and skills!
Dead Cells will slay its way to iOS devices this summer

Paris, France – May 7th: Motion Twin, the award-winning French studio, partners up with Playdigious, the established publisher behind Evoland 2 and Cultist Simulator mobile, to adapt and publish the critically acclaimed roguevania Dead Cells on iPhone and iPad this summer!

Get notified by email

Dead Cells is an award-winning roguelike metroidvania action platformer. Explore a sprawling, ever-changing castle… That is, assuming you’re able to fight your way past its keepers. To beat the game, you’ll have to master frantic 2D combat, with the ever-present threat of permadeath looming.

First available on PC and console, Dead Cells is now in the final phase of a true mobile adaptation coming this summer on iOS!

Dead Cells will come later on Android devices. Get notified when it’s out by email here!

We’d love you to review the game! Email [email protected] for a promocode!

Back in 2018, Playdigious listed Dead Cells on the Play Store under pre-registration, but it would seem someone at the company had jumped the gun a little early, and so the listing was wiped clean. Thankfully it was confirmed in 2019 that the popular roguelike would indeed be officially coming to Android, but at the time, no date of release was provided. Well, in a recent response to TouchArcade on Twitter, Playdigious has confirmed that Android users can expect the arrival of Dead Cells on the Play Store in Q3 of 2020, which means the game should land sometime between the beginning of July and the end of September.

Android version will be out Q3 2020. We are also working on content update but do not have a timing to share at the moment. Ultimately we will catch-up with Console/PC versions.

Dead Cells is coming to Android on June 3rd

In January, we learned that Motion Twin and Playdigious would bring the award-winning roguelike metroidvania Dead Cells to Android in Q3, and today these studios have confirmed that the game will arrive on June 3rd, which fits squarely within the previously announced timeline. On top of this announcement, the title is finally available on the Play Store for pre-registration, after a brief appearance two years ago that first clued us in that the game may be coming to Android.

Once the Android version of Dead Cells lands in June, it will be available for 10% off its retail price ($9.99) for the first week. There will be no in-app purchases or advertisements present. It will be a premium release. Of course, if you’re eager to get your hands on the title, you can pre-reg through the Play Store widget at the bottom of the page so that you’ll receive a notification on release day.

Dead Cells will escape to Android devices on June 3rd!

Montpellier, France – April 7th: Play as an alchemic experiment that doesn’t seem ready to kick the bucket just yet! Dead Cells is set to release on Google Play on June 3rd! Pre-Register now to get notified when the game is out to grab it at a special 10% off launch price (regular price $9.99/9.99€) for its first week of release!

In addition, for the first time Dead Cells iOS is at -30% for a whole week, starting today!

Dead Cells is an award-winning roguelike metroidvania action platformer. Explore a sprawling, ever-changing castle… That is, assuming you’re able to fight your way past its keepers. To beat the game, you’ll have to master frantic 2D combat, with the ever-present threat of permadeath looming.

Dead Cells is now in the final phase of its Android adaptation, coming on June 3rd!

Motion Twin, the award-winning French studio, has partnered up with Playdigious, the established publisher behind Evoland 2 and Cultist Simulator mobile, to adapt and publish the critically acclaimed roguevania Dead Cells on mobile!

Get notified when it’s out by email here!

About Playdigious:
Based in Montpellier, France, Playdigious is a publisher with in-house porting capacity currently working on high quality indie games on mobile, PC and console (Dungeon of the Endless Switch/PS4, Cultist Simulator Mobile, Dead Cells Mobile, etc). The company was established in 2015 by Xavier Liard and Romain Tisserand, experienced entrepreneurs who previously founded DotEmu. 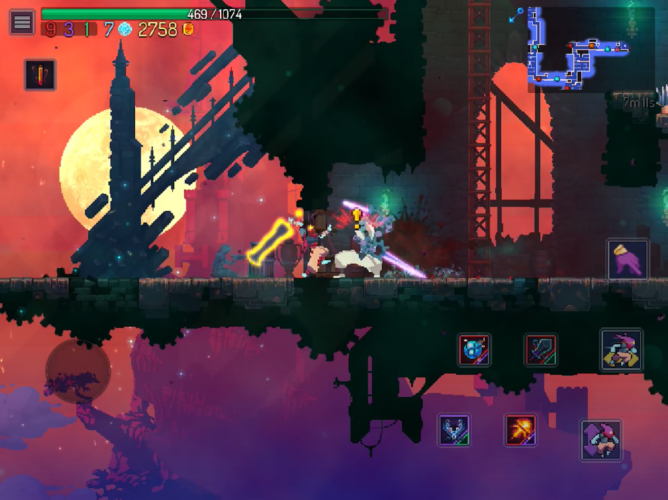 It’s finally here folks, and I can confidently say it was worth the wait. The last time we heard about the Android version of Motion Twin’s exceptional roguelike platformer Dead Cells, we learned that the game would be officially released on the Play Store on June 3rd. Well, it would appear that someone has pulled the trigger a day early, and so you can grab Dead Cells right now for $8.99. As luck would have it, this is a special price that’s currently offered at a 10% discount that will last for the next week in celebration of the game’s release. Oh, best of all, this is a premium release, which means there are no advertisements or in-app purchases included.

Having taken the game for a spin on my trusty OnePlus 7 Pro, it’s clear that the game performs well on higher-end devices. You can choose to play the game at 30fps, as well as 60fps, and you can even set the framerate to unlimited, which is great for high-framerate devices. Now, I can’t tell what resolution the game is playing at, though there is an option to select high-resolution graphics in the settings. Personally, I set my FPS to unlimited, and used the high-resolution graphics, the game looked wonderful, and it didn’t stutter a bit. Smooth as silk, would be another way to put it, which is surprising considering the game chugs on my 2018 iPad Pro.

I’m also glad to report that the game supports physical controllers. I connected my SteelSeries Stratus Duo to my OP 7 Pro over bluetooth, and the controls were very responsive. Of course, if you don’t own a physical gamepad, I’m happy to say that the touchscreen controls aren’t half bad. It will take a little while to get used to them, but they work well enough, at least at the begging of the game.

All in all, the early release of Dead Cells on the Play Store is a welcome sight, and thanks to the game’s discounted release price, you can pick it up today for $9, which is $16 cheaper than the Steam version. So if you’d like to purchase Dead Cells today while it’s on sale, you can grab the game through the Play Store widget at the bottom of the page.