Based on internal documents from T-Mobile given to Android Police, some older devices, including the OnePlus One, Xperia Z3 series, and Nexus 9, will be unable to connect to the company’s network beginning on January 29th, likely tied to the new VoLTE requirement as a result of its upcoming legacy network shutdown. 19 devices, including phones, tablets, and even cameras, are named by the document. Affected customers will be notified by SMS beginning on December 28th.

According to the documents sent to us (which we have verified as accurate), the following devices will be unable to use T-Mobile’s network as of January 29th:

Note that although the AT&T and Verizon Note 4 are affected, the T-Mobile version of the phone is not. It is also possible other devices not on this list may be affected.

Most of the devices T-Mobile lists as being left behind are quite old in smartphone terms. The majority are from 2014-2015, though the Huawei P9 landed in 2016. These are devices that stopped getting official updates a long time ago, and even excluding this end of carrier support, it’s in these customers’ best interests to upgrade to something with more recent security patches. However, the inclusion of the Arlo security camera and R11 e-LTE6 are odd, for reasons we’ll touch on later.

Connected to the list is a longer text that explains the devices are being left behind due to their inability to receive an update required for continued functionality on T-Mobile’s network, following a network change — almost certainly tied to the long-awaited mandatory VoLTE support. The change will also affect Metro and Sprint subscribers, and details there get a bit muddier.

T-Mobile is required to maintain Sprint’s 3G network for three years as a condition of the merger, and presumably, those customers would still be able to place calls using Sprint’s network without any need for VoLTE. The document still claims Sprint customers will be impacted, but a later section states only those on T-Mobile or Metro by T-Mobile will lose all network connectivity. It’s possible Sprint subscribers with affected devices may only lose T-Mobile network roaming. We reached out to T-Mobile for more information regarding how this change would affect Sprint customers, but details weren’t provided. 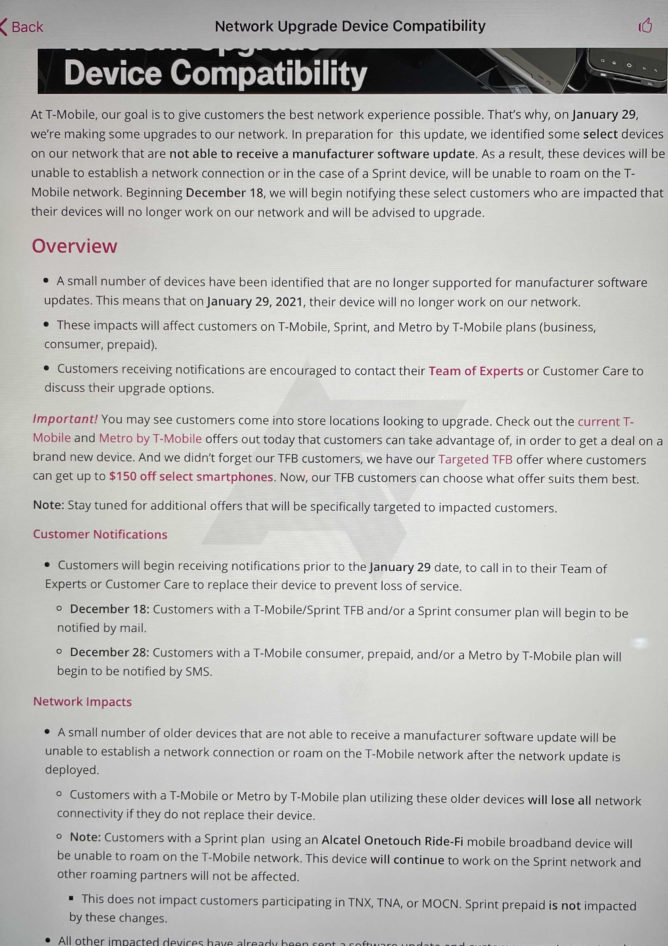 The document claims that snail mail letters were sent to those affected by the change beginning on the 18th, and SMS-based notifications will be sent on December 28th, giving customers around a month to replace their devices. Some business customers will be pushed to an existing $150-off promotion, and T-Mobile employees are told to “stay tuned for additional offers that will be specifically targeted to impacted customers,” implying they may eventually get a discount for the hassle of upgrading. Based on the timing, it seems like T-Mobile is hoping they’ll pay to upgrade on their own before those offers land.

Again, we aren’t entirely sure if the “network upgrades” mentioned in the document are tied to the mandatory VoLTE support we wrote about earlier in the year connected to the retirement of T-Mobile’s legacy 2G/3G network, but both the timing, the apparent requirements, and the list of devices imply a connection. We asked T-Mobile for explicit confirmation, but it wasn’t immediately available. The company did not accept our offer to publish a statement when asked.

If the change is connected to the VoLTE, then the inclusion of the Arlo security camera as a device that will no longer function is strange. Presumably, a security camera doesn’t need to make voice calls, and the original model didn’t have features like two-way audio. The same goes for that R11e-LTE6 mini PCIe card. We’ve reached out to Arlo for more information.

In the meantime, T-Mobile subscribers using any of those 19 devices should look into an upgrade. If you’re worried about your phone, you can check and see if your device supports VoLTE with our guide.