Google Assistant has come a long way from its early days of answering simple questions about the weather. Unfortunately, it’s got some way to go before it can be described as a competent singer, and I don’t want you to take my word for it. Go ask it to sing you a New Year song and you’ll see what I mean.

While the 8-bit music is something I can digest, the corny lyrics and robotic singing are definitely not passable. The song is accompanied by a looped video of a dancing, anthropomorphized Earth (maybe?). As Scott can attest, it’s possibly even worse when sung by the British English Assistant.

2021 is (finally) right around the corner. 🥳 Say “#HeyGoogle, sing the New Year song” to count down to the new year with Google Assistant. pic.twitter.com/baawtRgCQ7

But hey, if you look at it from a different perspective, what better way to pay homage to 2020 than with a positively terrible song? I’m almost inclined to believe that this is intentional because the Assitant does a rather good job when you ask it to sing a Christmas carol. 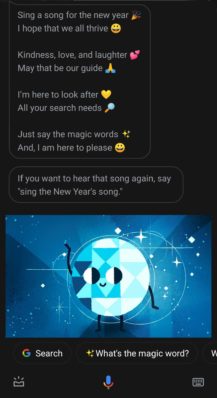 You can summon the assistant to play the song by saying “sing the New Year’s song” or a similar phrase. But, if you’re looking to catch something more melodious, I suggest you check out Google’s Blob Opera experiment — sweet tunes guaranteed.